Athani is the last road-accessible village in Lefkada’s south, and it’s the gateway to some of Lefkada’s and worlds most beautiful beaches. We’re talking about Porto Katsiki and Egremni here, of course. Sadly, both these beaches have been hit by a magnitude 6.5 earthquake in late 2015, and latter of the two has pulled the shorter straw. Egremni is currently buried below the landslide, and we can only hope that Greek authorities will put in an effort to return it to its former glory – sooner, rather than later.

Needless to say, Egremni will be excavated, so to speak, but the only unknown is when. Knowing the laid back Greeks, we wouldn’t count on beach’s speedy recovery. Even without the human interference, nature itself will restore current debris into beach again. Nature, however, will take its time, and this process could take years without much-needed human interference. 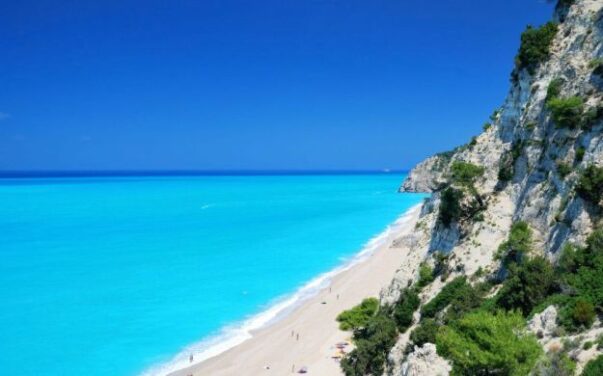 Before the earthquake, this was one of world’s most prolific beaches – which we have said already. It’s tough to decide what used to be its main advantage. Was it the white sand, crystal clear blue water, or the picturesque landscape that surrounds it? One thing that will certainly leave you speechless is the beach approach and the view that you get from stairs that allows you to reach it. Probably popularity of this paradise beach comes from the combination of all these facts. Such amalgams are rather rare, and Egremni beach disaster is, thus even bitterer pill to swallow.

This beach was dubbed paradise on earth. Apart from mentioned natural prepositions, Egremni was (and still is) isolated from Lefkada island communities. It’s also hard to get to, given there are only couple of ways to make it there. One is by water, and the other is by stairs. Stairs too, have been damaged in earthquake, so there’s another reason why it won’t be open to public for unforeseeable time. Given its wild nature, it doesn’t feature any amenities in its close vicinity. It’s a true retreat, and as such, doesn’t even need them. You can easily bring everything you might require by yourself, however, but don’t over pack as descent is rather steep and exhausting. Once again, though – you’ll have to wait for Egremni to become accessible again as its current state isn’t really great.

As mentioned above, closest settlement is Athani which offers a few accommodations. Serenity Boutique Hotel, Seven Islands and Porto Katsiki Guesthouses are your best bet for lodging, while Lefkatas Taverna offers renowned Greek gyro among other items on the menu. Taverna and lodgings might not be picturesque, or of high quality, but they’ll do for most people, especially since there’s nothing else in Egremni’s close vicinity. If you’re not coming from the north, you must be coming from the east and Vassiliki. While there’s no direct route from Vassiliki, a few mile detour is certainly worth it – or rather was before the earthquake.

I have failed to mentioned Anerada Mediterranean Houses and Rosoli Country Houses which are just around the corner of beach because they might just be closed coming next season. Needless to say, most of their traffic was driven by the beach itself, and now that the beach is defunct, these apartments might follow. Sad, but true.

It’s a pity that this beach is no longer at its full capacity, but forces of nature can’t be fought. One might ask himself: why listing the beach that’s currently inaccessible here? Well, Egremni has certainly deserved to be taken into consideration, even with all that has been happening with it lately. After all, this is arguably the most beautiful beach on Lefkada, and whole of Greek Ionian coast. Furthermore, it’s one of the best beaches in the world, or rather it used to be.

Porto Katsiki – One Of The Best