Greek Ionian coast might not be an exclusive destination aimed at by the world’s jet-set, but this doesn’t mean that Ionian coast beaches aren’t at least on par with their Aegean counterparts. Not all of them are, though, but some Beaches around and on Lefkada certainly warrant an upscale status. Take Gyra, for example. It’s pretty much one of the closest beaches when entering the island via road. It’s just a mile or so from the sandy strip of land and a bridge used for transfer between the island of Lefkada and Greek mainland. That’s north-eastern part of the island, and you don’t even have to go into town of Lefkada. Instead, you can go straight for the Gyra beach and enjoy all of its splendors.

Gyra beach is, as we have said, just a tad bit north of Lefkada’s first town – named appropriately. This strip of sand that holds the beach and a road encompasses the bay of Lefkada town, thus creating a lagoon in Gyra’s rear. Beach, however, is on the opposite side of the narrow strip – across the road from the mentioned lagoon. Unlike the lagoon, main part boasts pristine sands and clear blue water. Thanks to that, beach proudly wears the Blue Flag laurel. This clearly showcases its unique tidiness as not every beach can get the Blue Flag. Apart from the obvious high requirements for water quality and clean surroundings, Blue Flag requires strict safety and services policies, as well as special environmental management and information. 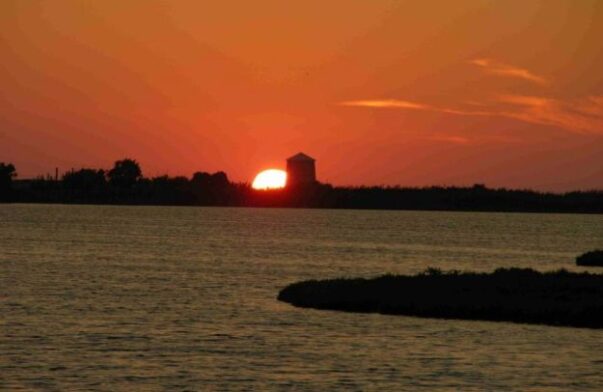 As for the beach and its material themselves, Gyra is mainly composed of sand and shingle, and the same can be said about the seafloor. Water is blue and clean, but there still are cleaner waters than those of the Ionian Sea. Water becomes deep rather quickly, so you won’t be able to play catch knee-deep 100 feet of the beach itself. As far as amenities go – Gyra offers pretty much everything it’s supposed to. Only thing you won’t be able to find there is a hotel in the background, but Lefkada town with its accommodations is quite close by anyway – and so are other Lefkada island’s resorts. Showers, parasol and sunbeds are widely available, though, and so are restaurants and bars. After all, beach stretches for quite a while. The fact that this beach is actually a long strip of sand goes into its favor. Most people tend to congregate around bars and traditional points which leave quite a lot of vacant, empty spaces. This is great for loners and those who want some privacy. There are a few camping spots as well, but they are mostly congregated at beach’s southern tip. Parking spots are rather scarce, but should be enough. Finally, as we have mentioned above – Gyra beach is easily accessed via road which practically hugs its rear part. Hotels aren’t that numerous on Lefkada altogether, let alone close to this beach. Still, there are plenty of accommodations in beach’s close vicinity. Hotels Lefkas, Nirikos, Ionian Star, Ianos and Portofico are all in Lefkas (Lefkada town). Closest official accommodations to Gyra beach, however, are Villagio apartments, Villa Marina, Lefkas Blue Residence, Villa Olivastro, Alexaria Holiday Homes and Villa Dimitris Apartments & Studios. Apart from that, you’ll probably find other, smaller accommodations – you only need to explore a little bit, and Lefkada town is a great place to do just that.

Gyra beach is basically one of the most important beaches in northern part of the Lefkada island. This Blue Flag laureate might not be a tropical paradise, but it’s one of the closest things to it – at least as Ionian coast goes. You might not want to spend your entire holiday on this beach but certainly it is a great option and a beach to which you will gladly return.