The village of Nydri can be stumbled upon while travelling the eastern coast of the Lefkada island. It’s pretty much at the mid-point of Lefkada’s east coast – halfway between the towns of Lefkada and Vasiliki. Between Perigiali to the north, and Kallithea and Steno to the south, making this town quite nicely tucked away. Tourists staying here are mostly family people or young people looking for a good time, and same thing can be said about more or less, the rest of Lefkada’s eastern coast.

Nydri, however, isn’t only a village, but a beach with the same name as well. Nydri beach, as you can probably imagine, is mostly frequented by the locals and tourists staying in town. Shingle and larger pebbles are what the beach is composed of, so you’ll be able to enjoy clear water without any dirt at all. Some parts of the beach have been covered in sand as well, but overall, pebbles dominate the surface. Like the Avra beach at northern edge of the town, this beach too consists of narrow strip with residential area just a few meters away. Trees that can be found between the beach and the houses create a nice shade during larger part of the day, but you can always rent umbrellas and sunbeds as well. Even water sports are available to some extent. While eastern side of the island doesn’t really favor the windsurfers, at least motorboats are at large. Given the fact that the beach stretches almost the length of the town itself, it’s no wonder why there are so many bars and restaurants in its background. 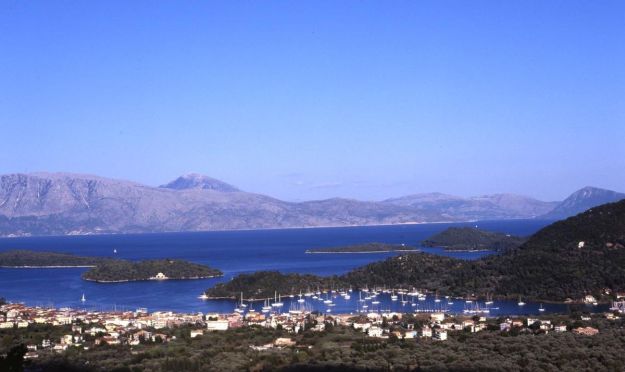 Accommodation and amenities are, as you can see, at large here. This is a resort town, and majority of population works thanks to tourism. All doors are open to everyone, and there are quite a lot of doors to come through while staying here. Nydri beach has a number of restaurants, bars and taverns which is one of the reasons why it’s rather crowded. Tom’s Seaside Restaurant, Flisvos, Porto Leone, Nidrion Beach Café, Obelix, Odisseas, Café Elidor, Pixida, Hausbrand, Ikaros, Pomodoro and many other are just a few bars and restaurants located along the beach. If you decide to venture further toward the town’s interior, picture will remain the same. Similar places just dominate this town which clearly showcases its touristic nature. 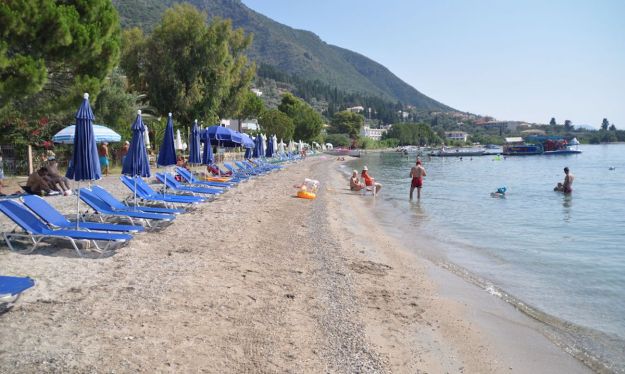 Lodging too is numerous, and you’ll get plenty to choose from. However, most accommodations in this village are on a budget side, as Lefkada itself isn’t really a jet set destination. Nydri beach itself features a few apartments in its close vicinity. Lefkadahouses, Valena rooms, Cosmos studios, Cosmopol, Homer’s studio and Santa Maura apartments are closest. Hotel San, Palmyra, Lefko on one side, and Nidri Placce, San Lazzaro, Ionian Paradise on the other aren’t that far away as well.

Nydri marina further down south, apart from being soft on eyes – offers a ferry line towards Spartochori which is on a nearby Meganisi island. Ferry is passing close to small Madouri island which you won’t be able to visit. Needless to say, marina itself is riddled with cafes and restaurants as well, and this doesn’t really come as a surprise given the busy nature of the place.

Nydri town and beach with the same name are one of most frequent places on Lefkada island. This resort town offers plenty of accommodation choices, and even more places to sit down and relax. Beach is rather long and narrow, but even its length doesn’t help it with the crowding factor. Given the fact that it’s basically in the middle of the town, it’s no wonder why you won’t be able to enjoy some solitary time here. If you’re up for some company, however, this is the perfect place for you.