Home
Beach
&
Lefkada
Porto Katsiki – One Of The Best

With Egremni beach’s demise, Porto Katsiki remains the only beach in Lefkada islands far south west; right? Well, no. This one too, has been damaged by the earthquake which struck Lefkada on November 17, 2015. However, Porto Katsiki might be restored by itself by the time new season begins and we certainly hope that this happens. That’s the assessment made by a number of geologists.

Still, without a few touches by the human hand, it will need much more time than that to return to its former glory. While we wait for Egremni to clear out, Porto Katsiki should take most of Egremni’s traffic, so expect it to be much more crowded than before. This might be the case for the next few years, at least. We need to add that with large number of nearby beaches there most likely will not be too crowded beaches. 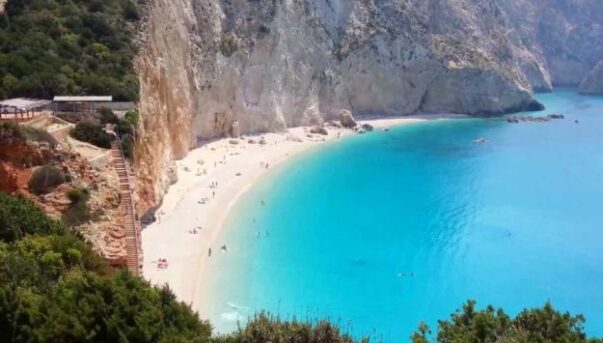 When you translate the name you will get goat port, which is kinda funny. Needless to say, only goats were able to reach this part of the island in the past, and by looking at beach’s landscape, it’s no wonder. Even today, you’ll have to break a lot of sweat in order to get there unless you’re cheating and coming here by boat. Porto Katsiki beach offers rather thin (currently even thinner) strip of white sand and plenty of blue water beyond that. Water quickly becomes deep, but that shouldn’t pose a problem for good swimmers. On the opposite side, it’s closed in by a steep pale cliff which cuts it off from the rest of the island.

Artificial stairs are the only way to get there by foot, but beach does feature a paved road access and is connected to both north and east. Parking lot doesn’t have a large capacity, so it’s better to get there early. Stairs are rather narrow, so you might need to be patient, depending on traffic. Finally, early birds will take the best spots for themselves, and these are the only ones with natural shadow. That’s why you should carry your own umbrella, and pretty much everything else you might have a need for. Do bear in mind the fact that even before the earthquake, Porto Katsiki used to be rather crowded – especially during August. 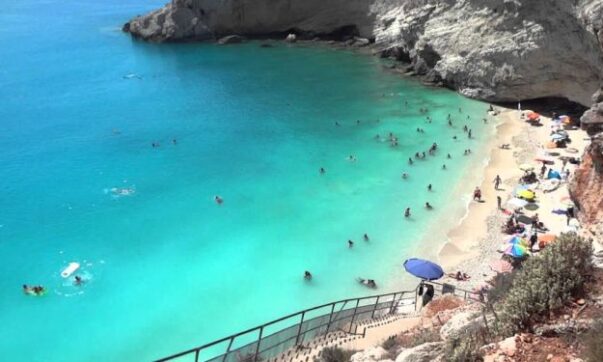 There isn’t much when it comes to amenities apart from Bilvi restaurant atop the cliff. Restaurant has a neat small pool surrounded by palm tree-made umbrellas which gives it a tropical bar atmosphere. Urania Luxury Villas are a few miles from Porto Katsiki, but this is a premium accommodation. More affordable lodgings can be found in Athani and Vassiliki, but they aren’t the only ones. There are a few apartments for rent outside of these towns. Taverna Oasis and Casa Varoli Guest House are on the way to now defunct Egremni beach, and you’ll likely be able to find a few more spots. Saint Nicholas monastery might be worth the visit too, especially if you’re on your way to Cape Lefkada which is the southernmost tip of the island.

Some would dub Porto Katsiki as Lefkada’s second most beautiful beach, right behind Egremni. With Egremni’s collapse, however, it should now take the pole position. However, we’ll have to wait for the 2016 season to begin before we see what happens with it. After all, this beach also has suffered from the earthquake, though not as severely as Egremni. Some tidying up will have to be done, together with natural clearing process which should take some time. 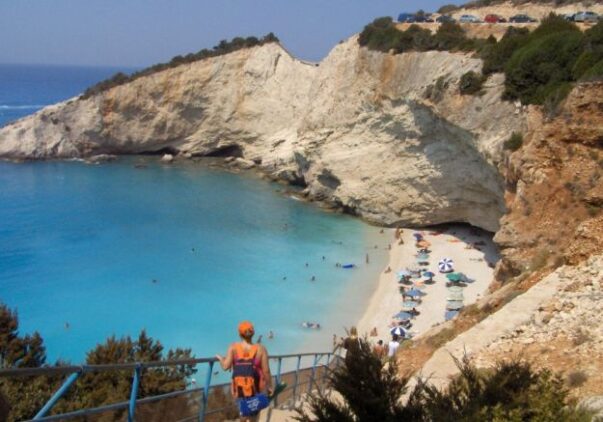 If you happen to find yourself in this part of the island, don’t hesitate to visit Porto Katsiki. Even if it’s not in its best light, this beach is a sight for sore eyes. You will easily fall in love with the sight that you are getting here, and you’ll fall fast. It is one of the beaches that you will visit and certainly return few more times during your holiday on this island.