Lefkada’s Kathisma beach is basically in no man’s land, being far from island’s settlements. OK, it’s not that far away, because entire island is not that big, but it certainly can’t be connected with any of the settlements. Closest villages are Agios Nikitas, Kalamitsi and Drimonas, and between the three, you’ll find pretty much everything you could have wished for, on your vacation. While Kathisma might be far from your lodging, you can easily opt to stay close to it as there are plenty of accommodations in its vicinity. It’s neither wild nor city beach, but something in-between.

Found just behind the Milos beach – Kathisma features well-developed infrastructure, and can be instantly accessed by paved road. Parking spaces shouldn’t pose a problem as well, since they are offered in abundance. Available amenities are another advantage, and you’ll get to choose where to refresh yourself while here. Theocharis Bros, Areia Club, Copla Beach Bar, Libre and Akrogiali are offering food, drinks and even night life. 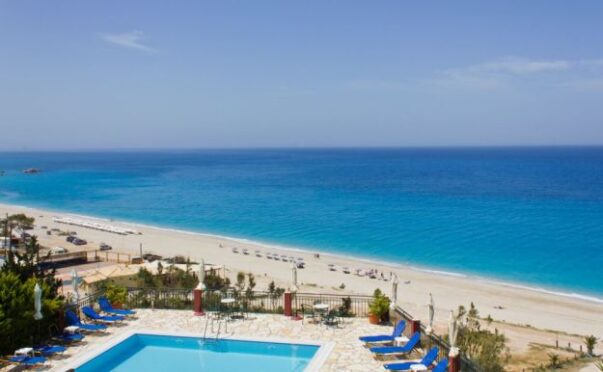 There are plenty of sunbeds and umbrellas in offer, so you certainly won’t have to worry about that. As far as the beach itself goes, it’s a great representative of Lefkada with white and yellow sands, and turquoise water. This is one wide, long, and large beach in general and as such attracts quite a lot of tourists. It doesn’t have to be crowded given its sheer size, but it certainly can be. Luckily, there are a few more large and renowned options in its close vicinity, so you won’t have too many troubles relocating even if you don’t like it. 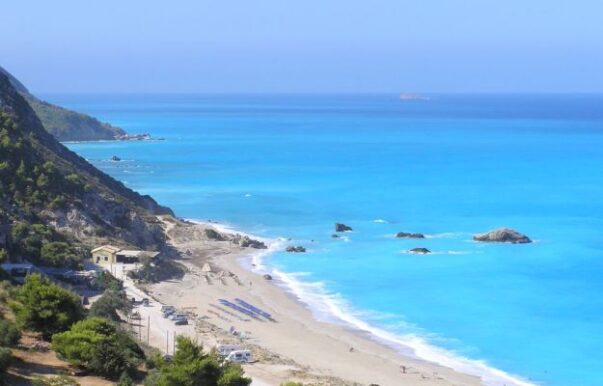 Kathisma is quite close to a number of accommodations. Althea Studios, Nikolas & Sofia Studios, Villa Armonia and Marathes Studios are the closest, and they’re just beside the main road connecting all the villages and towns on Lefkada’s west coast. Camp Kathisma is another mean of lodging which can be utilized, but we don’t really see a connection here. Camping would have been better on wild beaches, and this one is much too developed, crowded and loud for that. La Casa D’Irene, Politia, Drimonari Villasa and Greenvilla can be found along the road towards Kalamitsi, while other side is basically connected with the village of Agios Nikitas.

Kathisma is one of those beaches that you’ll find in mainstream prospects and brochures. It’s not a hidden wild beauty, and doesn’t even try to attract tourists that way. Its white sands and clear blue water, however, are something that might be found across many wild beaches. Whiteness can be annoying at times, though, as sun seems to blind while at its highest point. Western exposition doesn’t protect from the winds, but Kathisma isn’t a place well-known for water sports and windsurfers. There’s plenty of space, though, so no one will bother you if you’d like to try something of the mentioned. Most people that visit this beach are young and plenty of bars right by the sea are what attracts them both during the day and night, hence it might not be the best choice for those bothered by noise. 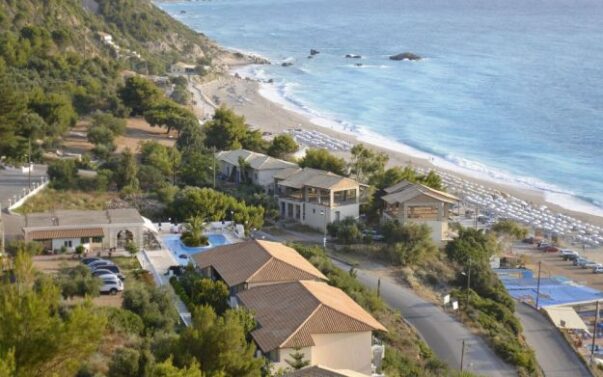 Kathisma is basically an extension of the Milos beach. The two are separated by steep cliffs, but are largely similar by their nature. While Milos is still rather wild and has kept its beauty mostly intact, this is fully developed beach with plenty of available amenities, and even nearby accommodations. It’s not really the best option for families, but sheer number of tourist profiles that can be found on this one go against that statement. In short – Kathisma is a place where you’re most likely to find someone you know, and who’s on Lefkada at the same time as you are.