Vassiliki is one of best-known destinations on Lefkada. Its position in island’s far south gives it different kind of exposition compared to other resorts and towns. Constant winds, in particular make Vassiliki one of the best destinations for windsurfers, but the town is close to some of island’s most prolific beaches, which makes it even more appealing to great number of tourists.

This one is close to Lefkada’s most beautiful and most popular beaches Egremni and Porto Katsiki. They are a few miles due west of town, but eastern part of the island (compared to town) also offers a number of beautiful beaches like Ammoussa and Agiofili. Still, the town itself is known for Vassiliki beach which stretches across the length of town. Being in a bay, it is protected from most sides, but winds still find their way inside the bay. In fact, this beach is one of Europe’s top wind surfing destinations, and it even hosts the annual Vassiliki Watersports Festival. 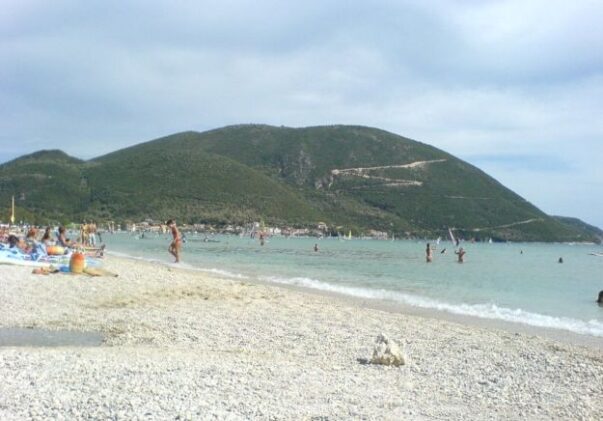 Beach itself is rather simple. It’s long and large and can easily accommodate the needs of both locals so it is pretty much impossible for it to get crowded. It features sand and grass surfaces, coupled with turquoise waters. Given the fact that it’s town’s beach, accommodations and amenities are offered in abundance. You can rent pretty much everything that comes to your mind from sunbeds and umbrellas to snorkeling equipment and jet skis. Sea is shallow for quite a while which creates even more space during season peaks.

As already mentioned, Vassiliki beach is integrated into town’s promenade, and it features a number of bars, restaurants and cafes. Pondi restaurant is the best-known on western edge of town, but most of restaurants are on the eastern side of the beach. That’s where you’ll find Taverna Kiani Akti, Cafe Remezzo and Cocoon among others. Eastern part of the beach is a home to Vassiliki’s port where most of town’s cafes and restaurants are. It’s of no use numbering all of them and you’d best check them out yourself. Lodgings too are numerous you have many to choose from. Starting from the port, you can check out Vassiliki Blue and Vassiliki Bay Hotel. Further towards the east and along the beach, you’ll pass by Imperial Studios, Phoenix, Enodia Hotel, Hotel Odeon, Vassiliki Star Studios, Bayside Apartments, Grand Nefeli Hotel and many more accommodations. You should be able to find something for your pocket that will perfectly suit you in all manners.

Straight down the middle of the beach, there’s a Nautilus Diving Club which rents diving equipment and offers much-needed lessons if it’s your first time. That, however, isn’t everything as Ionian Explorers Club nearby offers kayak rentals. Finally, well-renowned Club Grand Nefeli can be found at the western tip of the bay, inside the hotel bearing the same name. This is where you can rent windsurfing equipment and see for yourself why this is such well-sought for destination.

Vassiliki beach might not be the most attractive on Lefkada, but it is well-established and doesn’t lack anything. It can be crowded, but then again, it’s a city beach after all and if you go only few minutes from center part of this beach you will find abundant amount of space. Vassiliki town, however, serves as a great base for exploration of whole of Lefkada’s southern coast. Some of the best beaches can be found close by, and you won’t lack any accommodations, even in season’s full swing. 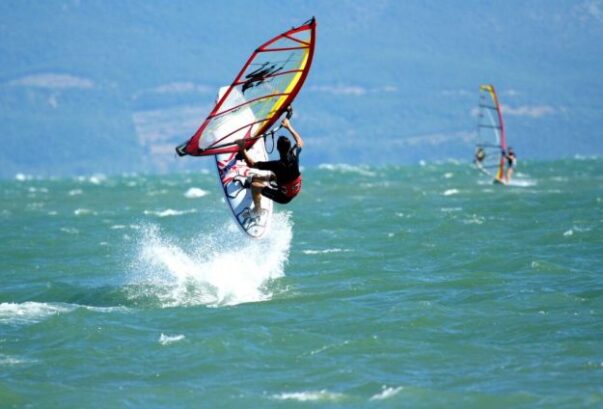 What Vassiliki is renowned for, however, are its water sports activities – especially windsurfing. Europe’s best come here at least once a year in order to enjoy looks, unique setup and great natural predispositions. Not every place has such natural perks, and this is Vassiliki’s main advantage. In the end, it only remains for you to come and see firsthand what Vassiliki is all about.

Ammoussa – Beauty Of The South