Aghiofili is arguably the best-known and one of the most beautiful beaches on Lefkada’s southern coast. It’s only a few minutes’ walk from Vassiliki, at the end of the road that goes south of town. While the road goes almost to the beach itself, in order to enter the cove, you’ll need to cross the dirt road.

As you can see, the infrastructure isn’t as developed as it might have been, but Aghiofili is a wild and untamed beach. As such, it doesn’t even need sparkling floors and noisy bars. Everything you need for a calm and quiet day, you will be able to find on this beach but be advised that you should bring everything you need that day.

Besides the fact that it’s situated in a beautiful cove, Aghiofili is rather pleasant to the eye as well. It has white sands mixed with shingle and turquoise waters as long as the sight stretches. Lush green vegetation in beach’s background plays its part as well, and so do large rocks – some of which are inside the water. It’s rather easy to get to Aghiofili, as we have mentioned, but you’ll have to get here from Vassiliki. There simply isn’t any other way – at least not by land. Arriving by boat is possible too, and you can even rent one in town of Vassiliki itself. 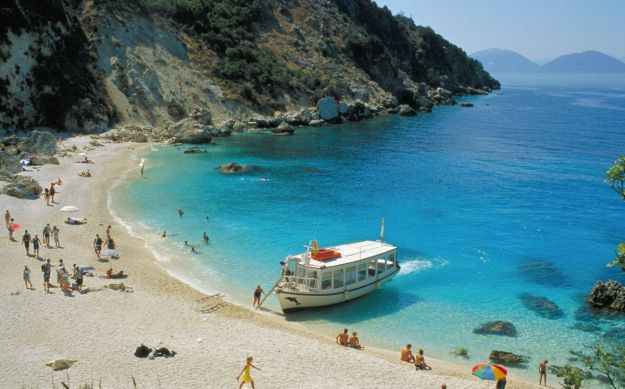 While Aghiofili is a semi-wild beach, you can still rent sunbeds and sunshades there. Other than that, the beach doesn’t offer any other amenities. Bars and restaurants are far from here, and you can find them in the town. Same goes for hotels and other accommodations. This really isn’t a problem at least for those people that like to take a little walk before and after a day on the beach.

Speaking of which, closest lodging are Villas Petalas to the south, but in order to get there from Aghiofili, you’ll have to take quite a detour. Across the towns of Vassiliki, Kontarena and Marantochori. So close, yet so far. Direct connection can be established with Vassiliki’s own accommodations. Naturally, closest ones are those on eastern edge of the town, but since you’re already in town; does it really matter? Vassiliki is not New York, after all. You can cross it in a few minutes with ease. Ermioni Sudios and Dimitris Apartments are definitely the closest, but Pension Holidays and Kostas Studios aren’t that much further as well. 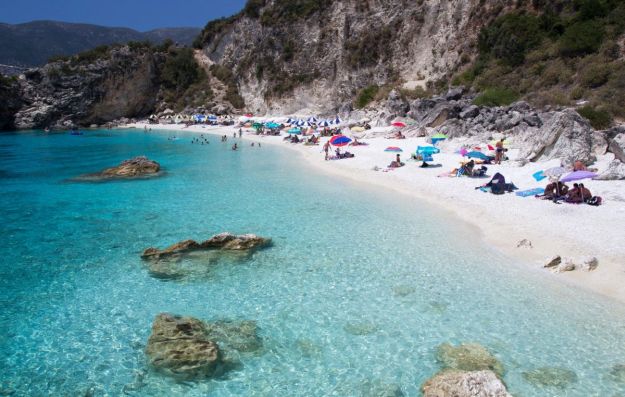 This is where harbor begins, so you’ll get your pick of bars and restaurants as well. Orfeas Rooms, Vassiliki Blue and Liotrivi Studios are a few more accommodations, and Miramare, Taverna Dolphin, JoMil, Cafe Yachs, Yacht Cafe Bar, Livanakis Cafe and Restaurant Ocean’s are some of harbor’s sitting places. No matter which apartment you choose you will not regret since they all provide similar level of luxury and comfort.

Aghiofili might be rough in terms of available amenities, especially parking, but that encourages walking. Unlike the town of Vassiliki itself, Aghiofili doesn’t support water sports. Windsurfers just don’t have that much of a space to operate there, and winds too aren’t really favorable since the beach is protected by a cove. This is a beach for hedonists, families, young and old alike. Sight itself is splendid enough on its own, and beach’s wild nature enhances it further. 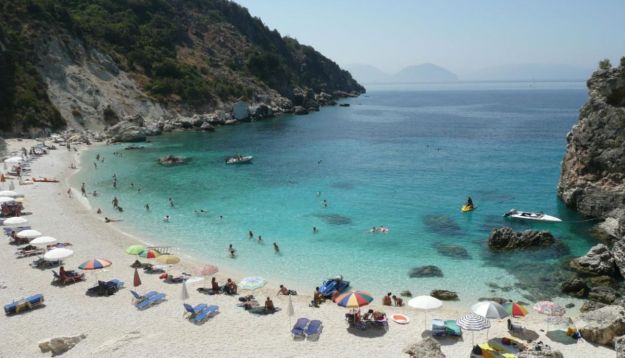 If you’re visiting Vassiliki or southern part of the island for that matter – Aghiofili should be high on your list of priorities. At least for a day. Just don’t forget to bring everything you might need on the beach with yourself as you won’t be able to buy anything nowhere near the beach. You should supply yourself in Vassiliki before taking on this quest. However, when you do finally get there, it’ll certainly be worth it. Most of the time, you won’t have to share the beach with too many people, but crowding factor can become a possibility during season’s peak in August. Still, what’s a little bit of crowd when you’re in such a beautiful spot?